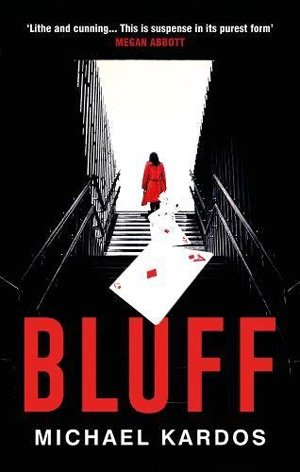 Written by Michael Kardos — Reading Bluff brings to mind Christopher Nolan’s movie of feuding magicians, The Prestige. In it there’s a scene explaining the three stages of a magic trick. First comes The Pledge. This is the starting point of the trick, and gives the audience some idea of what may happen – a watch may disappear, the identity of a card chosen from the pack may be magically revealed to the audience, and so on.

Kardos starts his novel by introducing his protagonist, Natalie Webb, performing card tricks to an audience of drunken lawyers at a convention in Newark, New Jersey. At age 27, Webb has already peaked in her career and is on the long slide down into mediocrity. Once a child prodigy, now she is going nowhere fast, and her one chance of kick-starting her moribund career by gaining an invitation to perform at the annual Las Vegas magician’s conference has just been denied her.

Webb needs funds quickly. Her last performance ended with her assaulting a member of the audience, and loathe though she is to give up being a magician – her childhood tutorials with local magician Jack Clarion were an escape from her father’s bankruptcy and her mother’s affairs – Webb recognises she has to think seriously about another career. Her one idea is to take up a past offer to write for magazines, and her lawyer, Brock McKnight, gives her an idea. He is friends with a card sharp who works local poker games, fleecing naive amateurs.

A card magician writing about poker cheats proves to be something she can sell to her editor, and her lawyer sets up a meet at a game in Atlantic City. The sharp insists on being called Ace – perhaps the first sign that this will not end well – and refuses to explain any of his tricks. He is dismissive of her interest in his technique saying, “You’re such a magician,” and Webb realises she will have to hope she can spot his tricks herself.

The game begins and Webb quickly finds herself bored. Ace is in no mood to cheat early, and the game is slow. When she does spot Ace cheating – dealing from the bottom of the deck – he is so clumsy anyone who knows the game could spot it a mile away. It looks as if the article is going up in smoke as there’s no way her editor is going to be interested in an article on Atlantic City’s worst card sharp. Then, something magical happens. Ace is actually losing to Ellen, supposedly a suburban mum and kindergarten teacher, but Webb notices she is cheating too. For Webb, the best bit is that Ellen is so good that she has no idea how the woman is doing it. Here, finally, is the person she needs to write about.

Getting back to The Prestige, is the second part of a trick called The Turn. That watch may reappear, only now it’s in pieces. Something magical has happened, but the audience knows somehow this isn’t the end.

With perseverance, Webb is able to gain Ellen’s trust. Webb wants the interview but Ellen has a counter offer. She wants to take on local politician Victor Flowers at his secret high-stakes game. To do it, Ellen needs a partner with skills of their on – skills which Webb has in spades.

Bluff begins as a noirish character piece, and the magic angle is very interesting. The story is held together by Webb, an intriguing and sympathetic protagonist with enough back-story to ensure her decisions carry an emotional weight. The introduction of Ellen changes the book into a heist thriller, but Webb’s first person narration keeps the tone the same throughout, and the change of pace is not at all jarring.

The final part of a trick is The Prestige itself. The magic is elevated by something unexpected, something extraordinary. I’m not going to spoil for you Kardos’ final twist, but be assured it elevates a good book in to an excellent one.