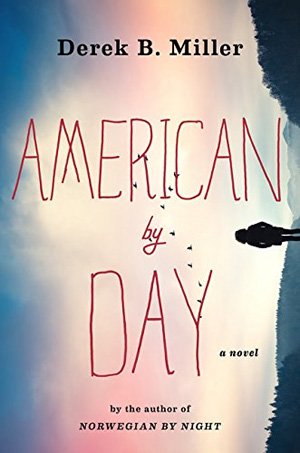 Written by Derek B Miller — With a catchy title that links to Derek B Miller’s previous novel, Norwegian by Night, American by Day has a completely different storyline and setting. However, as we noted when we reviewed the 2013 book, there were themes of family, loss and regret, and in that sense the books are very much related. Plus, of course, American by Day sees the return of Norwegian detective Sigrid Odegard.

It is August 2008, just two short months after the tragic events of Norwegian by Night. Morten, Sigrid’s father, has invited her to the family home, a place loaded with emotion for Sigrid. Though she remembers a happy childhood growing up there, it’s also the place where her mother succumbed to cancer. Astrid’s death hit Morten and Sigrid hard, but affected her brother Marcus the most. He became increasingly sullen, angry and withdrawn, and in adulthood drifted away from the family.

More recently, Marcus has been writing to them again. His letters sounded happy, he was employed as a teaching assistant at a university in upstate New York. There was even a mention of a woman – perhaps a romance. But now the letters have stopped, the last one containing an ominous note: “It has happened again, it’s my fault.”

Morten believes that Marcus is missing and in danger. He asks Sigrid to travel to the United States to search for him, arguing that Sigrid and Marcus need to find rapprochement, and that the leave will help her to recover her mental balance after her involvement in a fatal shooting.

Sigrid arrives in Watertown to discover that Marcus is a person of interest in a possible murder case. A professor from the university specialising in the sociology of ethnicity called Lydia fell to her death on a construction site. Sheriff Irving Wylie has a witness placing Marcus at the scene. Irving agrees to keep an open mind about Marcus’ involvement if Sigrid agrees to work with the police and not conduct her own separate investigation. It’s an agreement that neither party intends to honour.

The developing relationship between Sigrid and Irving is one of the novel’s strengths. The clash between the folksy but deceptively canny Irving and the rational but suspicious Sigrid provides many comic moments as their investigation proceeds. That they eventually come to respect each other’s view point and even begin to like each other is characteristic of Miller’s very human perspective. This is something he maintains even during the novel’s darker moments.

There is also room for social observation. Lydia’s nephew, a young black boy, was shot dead by police in a neighbouring county. He was playing with a toy gun. The inquest has absolved the officer of any wrongdoing, but was the boy a victim of racist attitudes which extend beyond law enforcement and into American society more generally? Miller shows us conflicting explanations, and is clever enough to let us decide for ourselves.

With convincing psychological insight, Miller draws a comparison between Lydia’s and Astrid’s death, and how Marcus may react to history repeating itself. Marcus’ life is in danger, not just from police who might be trigger happy, but also from himself. Sigrid must put her doubts about America to one side in order to save her brother.

I ripped through American by Day in two sittings. It is a short novel that reads quickly thanks to Miller’s an uncluttered style, but there is real depth to this novel. Thrilling when it needs to be, often funny, it left me with a smile on my face.

Also check out our review of The Girl in Green, Miller’s second novel which is based around the Afghan conflict.