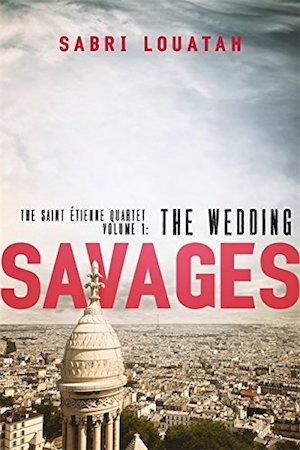 Written by Sabri Louatah, translated by Gavin Bowd — Savages: The Wedding is the first book in the Saint Étienne Quartet. It was Sabri Louatah’s debut, and he has cited the 2005 French riots and Dostoyevsky as inspirations for his socio-political thriller saga. He’s garnered prizes, the TV rights have been sold, and the francophone literary world has been left breathless with praise. Now the book is available in English, and the rest of the series is to follow.

It is the eve of the French presidential election and for the first time the favourite to win has Algerian roots. Idder Chaouch is a charismatic leader and he is spending the last few hours before the final decisive vote with his wife Esther and daughter Jasmine. Jasmine’s boyfriend is Fouad Nerrouche, an actor who also has Algerian origins.

Fouad is spending the day at home with his large family in Saint Étienne. His brother is getting married with all the traditional ceremony and family turbulence one would expect. Krim is Fouad’s young cousin and stands in as a witness when Fouad is delayed on the train. However, Krim is becoming increasingly unstable and behaving erratically. He’s smoking dope and fretting about his liaisons with some seedy characters. They have something on him. He is receiving a stream of text messages from Fouad’s estranged brother, Nazir.

We spend most of this novel in the bosom of the Nerrouche family during the preparations and process of the marriage of Fouad’s brother, Slim. The story lingers on uncles and aunts, sisters and brothers, cousins and extended family of all varieties. There are small incidents, diversions and character studies, and a subplot with a Romanian tranvestite and the violent Mouloud Benbaraka.

The election looms over the wedding but, other than the first few pages in the company of the presidential candidate Chaouch, we don’t meet him again until the end of the book. We follow Krim as he stumbles through the wedding and we slowly get a feel for his instability and agitated state of mind. It becomes increasingly obvious that Nazir, Fouad’s brother, is a dubious figure and enmeshed in the criminal underworld. There’s no love lost between the two brothers.

This book is closer to a family saga than a political thriller and it has the vibe of an extended prologue. TV rights may have been sold to Canal+ but this first novel in a four book series is more of a teaser. Perhaps, as in The Deer Hunter, the wedding will prove an essential scene setter but it is hard to imagine the storytelling pressures of the small screen would tolerate the leisurely nature of this narrative. We are introduced to a huge cast of characters from the Nerrouche family and this feels a little overwhelming.

There is still much to like. The writing is tending towards the literary and poetic and that’s just as well when the story is so languid. There is a lot of deep and satisfying detail around the nuances of the Algerian culture and the Kabyle people. The unravelling of Krim is handled well as the book builds to its climax. The translation is also smooth and there is little that jars. There is the occasional moment but I suspect this may be due to complex idioms where the French language and Arab culture intersect and they lose a tiny bit in the rendering.

I have high hopes the Saint Étienne Quartet will erupt into an epic political thriller with vast scope but it is difficult to recommend this book as a standalone. It is more of a speculative investment for the future. Given the rave reviews that Sabri Louatah garnered for the series it may be worth pushing through into the next one. But you will have to exercise some patience to get into this French bestseller series.