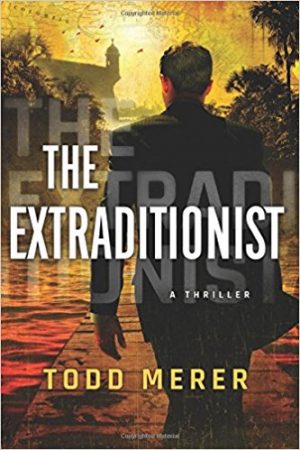 Written by Todd Merer — A debut thriller that shines a light into a particularly dark corner of the legal world, The Extraditionist is the story of a talented lawyer who’s made his comfortable living representing the leaders of drug cartels at risk of being extradited to the United States. According to the cover copy, author Todd Merer is a specialist in defending high-ranking cartel chief in real life. “He gained acquittals in more than 150 trials,” it crows. This seems a dubious business and, as a result, you may have trouble warming up to the book’s protagonist, a first-person narrator who may be no more than the author’s alter-ego.

Narrator Benn Bluestone lost his wife over his morally questionable and undoubtedly high risk choice of clients. He just needs to make one final big score before he’s ready to retire. He’ll cash in the frequent flier miles accumulated in travel to Miami, Panama City, and Colombia, and live quietly. So he says. It’s clear he gets a rush from the dangerous situations he negotiates, as different cartel leaders betray each other. Which side will Bluestone end up on?

When three potentially lucrative clients send out feelers he whips into action. First, a Bogotá lawyer who generally referred cartel clients to certain Cuban lawyers in Miami wants Bluestone to meet a probable fugitive, which would net Bluestone a hefty fee for negotiating the surrender, and another one afterward. The $50,000 he receives as travel money suggests the payoff for this work will be hefty.

Second, Bluestone’s friend Foto invites him to Panama City for serious work – helping clients trade information about drug deals, players, and pipelines that the government wants for minimal jail time. Third, a Colombian lawyer colleague named Paz (‘peace’ in English, ironically) summons him to Colombia because he had a case for him. Ultimately, these three plot lines become entangled like the jungle paths our anti-hero follows on his travels.

Bluestone knows little about any of these potential clients, except that they are all dangerous men supported by large, trigger-happy criminal gangs. Nevertheless, Bluestone is all in, hoping for that big score. There’s a possibility that one of the three is the elusive Sombra, a mysterious drug lord living high in the Andes among the Logui people. They believe Sombra will be their saviour, uniting the Indians against the Spanish. He pays no bribes and extorts no officials. Bluestone is skeptical. “In my experience, tales of the moral principles of drug legendaries are bullshit. On the opposite end of the spectrum, stories of their violence are underestimated.”

Bluestone’s attitudes toward women are established early, as he engages in a one-night stand, and explains how his relationship with his wife fell victim to his association with despicable characters. Not to mention, “I wasn’t a one-woman man.”

Throughout the story, Bluestone’s friends and confidants and fixers and what-have-you are murdered by one cartel or the other – and you may have difficulty keeping them straight – yet Bluestone soldiers on, seemingly unaffected by the death and destruction that follows in this wake. Only the loss of one of his first drug lord clients, who was murdered along with his entire family and all of his associates, seems to haunt him. Over the course of the narrative, he develops a theory about who Sombra is (one I did not share), and you may figure out rather quickly the true identify of a couple of key characters.

A lot of money sloshes around. Bluestone receives substantial cash deposits to his bank account from the bad guys, which seems implausible. We learn that Bluestone is under investigation, and with banks required to report any deposit over $10,000, how are multi-millions able to pass under the radar?

The huge amounts of cash – most probably realistic in drug cartel terms – the casual way in which they are handled, the wholesale murder, and the moral position of a man who would attempt to obtain for drug traffickers the lightest possible sentences exposed a moral vacuum at the heart of this novel that makes it difficult to care about the protagonist or his supposedly clever doings. It’s quite a contrast to the perspective on the destructive wake of the cartels (in Mexico this time) of Don Winslow’s excellent The Cartel.