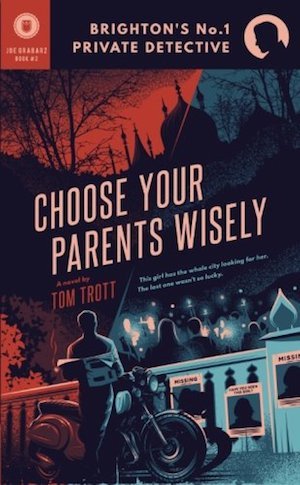 Written by Tom Trott — Joe Grabarz is a young private investigator on the south coast of England. The streets in Brighton are more gentrified than mean, but it has its share of dirty secrets. Grabarz has the wise-mouthed street smarts to dig them up. When local girl Joy Tothova goes missing, there is a media frenzy and a ‘Find Joy’ campaign. Despite Grabarz’s initial reluctance the reward proves too tantalising for him to resist. Part of his reticence is related to his past history when it comes to finding missing girls. It has clearly left his mark on him.

The story of an earlier investigation forms the other strand of this novel and it flits between the two timelines. We have Grabarz’s case in modern-day Brighton but we also go back to a parallel track with the investigation into the disappearance of eight-year-old Mahnoor Jilani.

Grabarz was a lowlife then and was reluctantly bounced into it by a cabal of foster mothers who had spotted that he was going off the rails. This slightly unlikely setup leads him into his first ever case. We learn early on that it doesn’t work out well.

Our protagonist has been poured straight out of the world-weary detective mould here in Tom Trott’s second self-published novel. He is still a young man but he has an old soul and wears his cynicism as his armour. It’s often funny and Grabarz has an eye for the absurd affectations of various strata of society. The upper middle class gentility of Joy’s parents is a ripe target for his caustic worldview. Trott spends a lot of time with Grabarz, exploring the various suburbs and locations in and around Brighton. As the two investigations into the missing girls progress the story lines converge and we learn more about Joe Grabarz and his own background.

On occasions the two storylines blur into each other and the time shifts struggle to hold onto the narrative. The big set piece action scenes do fall a bit flat and stylistically these feel a bit cold. But, the dialogue is a pleasure and the scenes that zip are the ones where Grabarz is bouncing off other characters. The unorthodox copper, Richard Daye, is a welcome addition, as is his young and generous hearted sidekick, DC Watson. The roles played by these characters tend to be on the fringes and I’d have welcomed even more time with them. It’s a first person narrative but Grabarz is good company.

As with Trott’s first book, You Can’t Make Old Friends, the cover is a sumptuous treat that fits the genre. Pleasingly retro it evoke images of Parker, Marlowe and all the private dicks that have come before Grabarz. Less certain is the tagline ‘Brighton’s No.1 Private Detective’. On first glance, it gives the book an Alexander McCall Smith vibe but this is no cosy – it has more of a pulp sensibility to it. Given the wit throughout the book it might well be an ironic nod from the author. Trott can clearly write. It might still have a few rough edges but there is real style here.

UK private detective fiction may not have quite the pedigree of its predecessors across the pond but Choose Your Parents Wisely is a worthy addition to the private eye sub-genre. Grabarz is an engaging character and Tom Trott is definitely one to watch for the future.