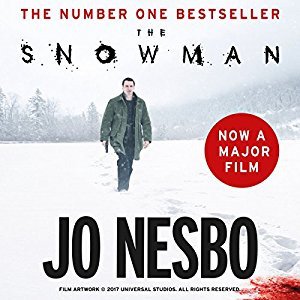 Written by Jo Nesbø, narrated by Robin Sachs — As the film of Jo Nesbø’s quintessential police procedural The Snowman (2007) comes to the big screen, listening to the audio version is perhaps an intermediate step between reading this terrifying bestseller and seeing the film.

The book begins in 1980 on “the day the snow came.” A clingy married woman and her lover have a final midday assignation while her young son waits outside in the car. A hint of menace, a sense of being watched, hangs over the scene. The watcher turns out to be nothing more than a snowman, but the boy says the snowman gave him a message: “We’re going to die.”

The book then jumps to 2004, again November, again a first snowfall, and a missing woman, Birte Becker. She and her husband Filip also have a son. A snowman mysteriously appears on the Becker’s lawn.

The Snowman was the seventh outing for Nesbø’s prickly alcoholic detective, Harry Hole. Harry’s notoriety from capturing an Australian serial killer in book one (The Bat) haunts him in the Oslo department. His superiors and colleagues are reluctant to believe Harry’s contention that a serial killer is at work in Norway. The psychology of these interactions is strong. There’s a lapskaus (Norwegian stew) of grudging respect and desire to downplay another’s success – in short, all the petty jealousies that interfere with getting the work done in the department.

A bright new transfer from the Bergen PD, Katrine Bratt, is assigned to work with Harry on the Birte Becker case. While he at first doubts her usefulness, her experience on the Bergen sex squad gives her good insight. Soon he comes to rely on Bratt’s instincts and judgment. They investigate cases of missing women going back a number of years, and Bratt discovers they all coincided with winter’s first snowfall. Another previously unrecognised common denominator is that a snowman stood near where each woman disappeared, an innocent symbol transformed into a diabolical observer.

Katrine Bratt is an attractive young woman and though Harry tries to keep his personal and professional selves separate, that’s increasingly difficult. He partly compensates by resuming sexual relations with his ex-partner Rakel, herself involved in a serious relationship.

The trope of settling first on one suspect, then having that theory demolished and settling on another, and so on, has become a bit hackneyed, though this is an excellent example of where it works well. When you are only 50 pages (or an hour) into a book and the police start saying they have their man, you know they’re wrong. Twists and turns inevitably lie ahead, with the real culprit laying down a succession of misleading clues. Nesbø is so clever with his logical traps that, even though you are sure they lie in wait, they’re still a surprise.

A bit of a problem for audio that wouldn’t arise in reading (or watching) is that the characters’ names are hard to remember, especially those of the victims. When hearing a narration about Tom or Betty or DI Morse, perhaps those characters go into a bin with all the other Toms or Bettys or DI Morses you’ve known, and those acquaintanceships help your brain form a connection. But when you hear about characters with totally unfamiliar names – Arve or Idar or Superintendent Skarre – you have nothing to attach them to. Regular readers of Harry Hole novels would have an advantage here, because they’d be already familiar with the Oslo PD personnel. Still it’s just a minor quibble and only requires a little extra attention.

The Scandinavian setting is, basically Nordic noir. Snowy. Wet. Dark. And the story moves through the slush in a doggedly determined fashion, like Harry himself, without any of the literary attributes that help crime fiction rise above the genre.

Well-developed secondary characters – a slimy-seeming plastic surgeon, the strangely distant father Filip Becker, a chauvinist playboy media mogul, and a now-dead policeman involved in an earlier Snowman case – are all attractive suspects whom Nesbø dangles in front of you.

The narration by the late English actor Robin Sachs is solid. Sachs has a good feel for the characters, having narrated several Harry Hole books, even though he makes Harry sound older and more dissolute than I picture him. When Harry falls off the wagon, his mental ramblings sound convincing.

For more on Harry Hole and his universe, read our complete guide to the series here. Watch the film trailer here.