After the Death of Ellen Keldberg 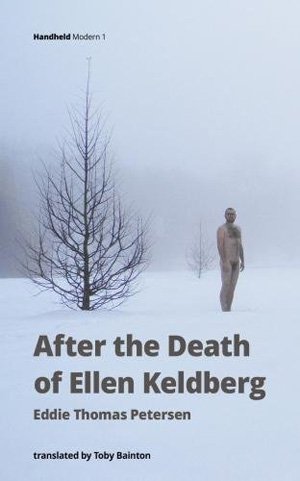 Written by Eddie Thomas Petersen, translated by Toby Bainton — British publisher Handheld Press has developed a reputation for putting out carefully selected works in a range of genres, including a couple of upcoming thrillers in its Handheld Modern list. The first, published this month, is a translation of a 2013 novel by Danish filmmaker and author Eddie Thomas Petersen, his first work available in English.

The port town of Skagen in north Jutland – the part of Denmark that looks like a finger pointing out towards Sweden – is a bustling hub of artists and Bohemians in the summer. In the winter, when the temperatures go below -10°C and you’re more likely to encounter a deer on the road than a painter or a photographer, the town retreats back into itself, with the locals eyeing the few outsiders who remain with a mixture of suspicion and contempt. Ellen Keldberg is one of the few artists who stays on, and not everyone in the town likes her for it. When she’s found frozen to death on a park bench after a night of heavy drinking, most of the locals just assume that she had a bit too much and couldn’t make it home. Few are concerned about the fact that not even an eccentric, aging artist would rest on a park bench in a snowstorm, without even a coat to stay warm.

Ellen’s body is transferred to her bed where, with the help of the cold air, she remains awaiting a post-mortem. Her nephew Mikkel, a student living in Copenhagen, is tasked with traveling to Skagen to make arrangements for her funeral, despite having precious few memories of his aunt. His parents are on holiday in New York, and no-one else is available or willing to organise Ellen Keldberg’s affairs. Ellen’s whole family had grown distant from her during the years she spent in Skagen, and as more details about her death and the secrecy surrounding it begin to emerge, so do details about the tense relations between Ellen and her family.

One headstrong woman, the photographer Anne Sofie, has something to say about Ellen’s death. She’s sure there’s more to it than just a drunk woman falling asleep on a freezing park bench, and she promises to expose the town’s secrets. Anne Sofie’s work is her main obsession, despite a lack of interest from the art world. Her mid-winter trip to Skagen starts off as a way to rebel against her parents, then turns into a search for a gallery to show her work, and finally into an attempt to expose the town as it truly is, as she sees it with her photographer’s eye. But Anne Sofie has her own family troubles, as her stubborn nature and her dedication to her art drive her to seek out Skagen in the winter, and the secrets it holds.

Despite Mikkel coming up from Copenhagen to organise his aunt’s funeral, the ceremony doesn’t occur until the novel’s closing stages. After the Death of Ellen Keldberg has a slow pace and focuses more on the interpersonal drama in the small town than the death itself, despite it being at the centre of the story. The claustrophobic atmosphere of a small town at the mercy of the elements is the main driver in this novel. Snowed-in during the dead of winter, everything in Skagen happens in slow motion, even a drunken collision with a deer on a snowy road. Perhaps the pace is the reason the translator chose to keep most of the novel in the present tense. It brings to mind Miss Smilla’s Feeling for Snow, a famously atmospheric novel that bought snowy Scandinavian crime fiction to the world’s attention. This is a novel for fans of Peter Hoeg’s modern classic, and After the Death of Ellen Keldberg will certainly win over quite a few more fans who like their crime fiction slow and atmospheric.

The significance of the cover art, with its picture of a naked man standing by a barren tree in the snow, isn’t made clear until the very last page. Just as with the true cause of the death of Ellen Keldberg, when the significance of the cover is revealed it isn’t mind-blowing. But at the heart of After the Death of Ellen Keldberg isn’t a mystery; the best part of this novel is the atmosphere, and the tense family drama.