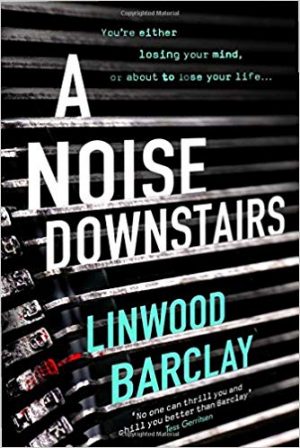 Written by Linwood Barclay — This could be called The Case of the Haunted Typewriter, because an old-fashioned typewriter is one of the eeriest images in Linwood Barclay’s new psychological thriller.

Paul Davis is a professor at a small Connecticut college living with his second wife on the shore of Long Island Sound. Late one October night he follows the car of his colleague Kenneth, with its distinctive broken taillight. Kenneth is driving erratically, and Paul worries he might be tipsy. When the older man stops his car on a lonely road and gets out, Paul does too and discovers that Kenneth has the bodies of two women wrapped in plastic shoved inside. Wielding a shovel, Kenneth hits Paul on the head and is about to kill him except for the timely appearance of the police, who have also arrived, interested in that broken tail light.

Eight months later, Kenneth has pleaded guilty and is in prison, but Paul is having difficulties. The blow to the head created significant medical consequences, but the PTSD is the most worrying thing. His wife Charlotte and his psychologist Anna encourage him, but he doesn’t feel right. He has headaches, he forgets things. Nightmares, a couple of panic attacks. Nevertheless, he plans to return to teaching in September, if he can.

At present, he’s haunted by the murders. Kenneth was a notorious womaniser, and apparently everyone knew it but his wife. Paul knew the dead women slightly – one an administrator at the college and the other married to the school’s human resources director. It seems Kenneth was carrying on with both at once, though neither knew about the other.

It’s a story that could be set in any town as most of it takes place within the four walls of Paul’s house and at Anna’s home and office. There’s an engaging subplot that involves her sensitive handling of her father who lives with her. He’s charming, despite being in the early stages of dementia, and she can never be sure how much he’s tuned into.

Paul decides the best way to get life back on track is to go back through all the information he can find about the case in order to lay his many questions to rest. He might turn his research into a magazine article. His therapist and his wife are initially dubious, but persuaded by his determination Charlotte even buys him an old-fashioned Underwood typewriter she found at a yard sale. It’s like a talisman of the case, because in one of its more ghoulish aspects, Kenneth made his victims type a note on such a typewriter, apologising for their “immoral, licentious, whore-like behaviour.” When Paul starts hearing the typewriter in the middle of the night, he slips downstairs to see who is using it, but the house seems empty. Eventually, he comes to believe it’s the very typewriter Kenneth made the women use, and his growing anxiety is persuasively described.

There are one or two glitches in believability. On a visit to Anna, Paul loses his keys and Charlotte has to pick him up. But if he drove to the psychologist’s office and after their session he doesn’t have his keys, why wouldn’t a thorough search be made before calling for a ride? Then when Paul believes there’s been an intruder at his home, why does it take so many pages before the characters link this to the missing keys? Ultimately, they are found in one of the two chairs in Anna’s office, but that discovery is taken at face value, and no one wonders whether they were really there all along.

Odd events continue, and to put the ghostly typewriter issue to rest, his friend Bill suggests that if, as Paul half-believes, the dead women are trying to communicate with him via the typewriter, why not put a piece of paper in it and see what they want to say? It’s an absurd idea, except that messages do actually begin to appear. Even if you are skeptical of the paranormal, it’s not easy to see how these tricks are being accomplished, and Paul, not fully of sound mind, becomes increasingly anxious.

Canadian author Linwood Barclay keeps the tension and the possibilities going at a brisk clip, and though you may figure out the direction of the plot early on, he has surprises in store.