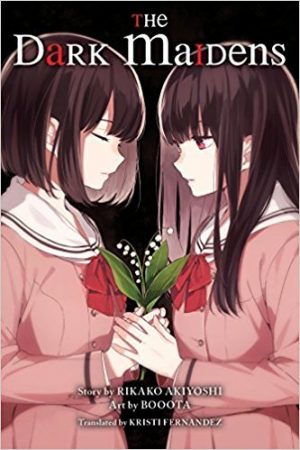 Written by Rikako Akiyoshi, translated by Kristi Fernandez, art by Booota — Every now and then you find yourself reading a book you’d never normally discover. Maybe you read a review and it sounded interesting, maybe you were late for a train and had to choose any book within reach, maybe you just wanted to try something different. The Dark Maidens is a book that, on the surface, will be a little off the radar for most crime fiction readers. But don’t let the manga-style cover art fool you, The Dark Maidens may be aimed at younger readers, but there’s enough darkness and complexity in here to please even the most die-hard crime fiction lover.

Told in a Rashomon-style succession of different voices, The Dark Maidens recounts the death of popular schoolgirl Itsumi Shiraishi. President of the literature club at her elite Catholic girls school, she has been found dead – she either jumped or was pushed from a high window at St Mary’s Academy into a garden below. The only clue to her death is the bunch of white lilies-of-the-valley in her hands, a clue that each member of the literature club interprets their own way. Shortly after her death, they meet for a reading, but instead of each reading an original composition of their own, their assignment, set by new club president Sayuri Sumikawa, is to each retell their version of Itsumi’s death.

The similarities in plot between The Dark Maidens and Akira Kurosawa’s film Rashomon and the Ryunosuke Akutagawa story it was based on, In The Bamboo Grove, are clearly intentional. The Dark Maidens is full of smart references to literature, both western and Japanese, as well as a complex narrative disguised in a style which reads like a direct transcription of the language of high school girls would use. This won’t sound appealing to everyone, and those who can’t see past the fact that this book was written about, and for, high school girls probably won’t find much in it for them. But if you look past any preconceptions about young adult literature will find a novel that has justifiably sold very well in its native Japan, and which has recently been made into a live action film. 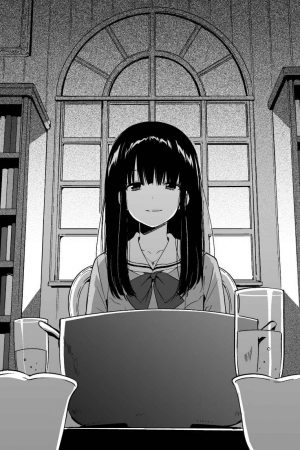 Each girl tells a different version of the events leading up to Itsumi’s death. First year scholarship student Mirei Nitani retells in the most florid prose how her time as a tutor for Itsumi’s younger brother bought her closer to Itsumi, and saw another member of the club form a burgeoning relationship to Itsumi’s father; second year student and master baker Akane Kominami tells how Itsumi took her under her wing, allowing her to use the club’s extravagantly stocked kitchen to bake snacks for the club. Akane also tells how she and Itsumi suspected the younger, poorer scholarship student of theft, but could she have gone so far as to commit murder? Bulgarian exchange student Diana Decheva tells how her love of Japan, and Itsumi, began when the beautiful Japanese girl visited Bulgaria on a homestay. Diana is sure that one of the other girls, who visited Bulgaria with Itsumi, was jealous and deranged enough to commit murder. Third year medical-school hopeful Sonoko Koga is certain that the Bulgarian exchange student has been attempting some kind of dark magic on Itsumi, and finally popular teen novelist and second year student Shiyo Takaoka is certain that Akane has been slipping poison into Istumi’s desserts. Almost all members of the group are accused, but which did it?

Despite being presented as a young adult novel, The Dark Maidens is much more than what it first appears. The language is simple, of course, and this comes through perfectly in the translation. Some of the issues are very specific to Japanese high school life, particularly at the insular world of an elite private school, and the perspective of the outside world, and Bulgaria in particular, seems written for people who have never been outside of Japan. Readers who are willing to look past this, and past the fact that this is a shorter novel with several illustrations, will be rewarded with a very different read.