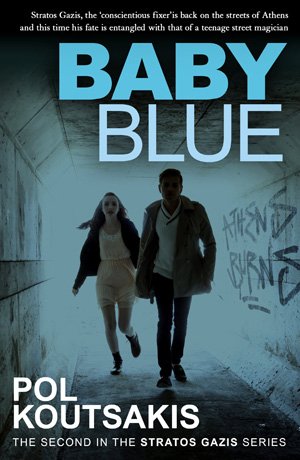 Written by Pol Koutsakis, translated by Anne-Marie Stanton-Ife — Polluted, seedy, austerity-era Athens is the perfect backdrop for a crime novel infused with a real noir feeling, and Pol Koutsakis is the perfect author to deliver it. This is the second novel in his series featuring the hitman-with-a-conscience Stratos Gazis, and it’s as good a place as any to embark upon the series if you haven’t read the first, Athenian Blues. Stratos takes care of any problematic people in your life, but only if his own research proves beyond any doubt that these people deserve to die. His own life is constantly under threat, for Athens is like a small town when it comes to the criminal community. Everyone knows everyone else’s business. So it’s not surprising that Stratos’ lover Maria is not keen to bring a child into his dangerous world.

Yet this latest case proves that Stratos is deeply compassionate beneath his cool stance and cynical quips. His homeless friend Angelino asks for help tracking down the killers of his protégé’s father. This protégé turns out to be beautiful blind teenager Emma, with the baby blue eyes of the title, and Angelino is hoping to launch her career doing amazing card tricks. Emma had been wandering around homeless herself for many years with her adoptive father, a disgraced investigative journalist named Themis Raptas. The journalist was brutally murdered three years before this story opens, but there are some similarities to a spate of current killings. Not the kind of job that Stratos would normally take on, but he cannot resist when Emma tells him that she is only out for revenge, that she has given up any hope of justice regarding her father’s death.

It won’t take you long to figure out that Raptas must have uncovered some unsavoury details about powerful people in his investigative work, but there is still layer upon layer of envy, evasion, secrets and criminal intent to work through. There are twists and turns on the path to keep even the keenest plot fiend happy, but this does not come at the expense of the characters. Emma and Angelino are portrayed in an endearing but unsentimental fashion. The baddies are not particularly memorable, but Stratos’ sidekicks certainly make up for that. Drag, the policeman with a single-minded, stubborn approach to solving crime, might not seem like an obvious ally for Stratos, but they are childhood friends, and so is the flamboyant Teri, who transitioned as a woman a few years back. They only have secondary roles in this particular book, but they form a useful safety net for a man who is not quite the lone wolf you might find in American thrillers.

Above all, the novel is drenched in the atmosphere of Athens – the stench, the missing manhole covers, the sea of desperate people of all nationalities lining its streets. There is a love-hate relationship in the narrator’s description of a city he no longer recognises as his own – “…something sick, trying to look, sound and smell like Athens” This is anything but a xenophobic rant, but it shows a divided city, where the struggle for survival trumps everything else and it becomes all too easy to blame others for your misfortune. This clear-eyed, unflinching view of the city also extends to the description of the world of the homeless, much more complex than it might appear at first sight. Emma points out that she and her father were happy on the streets as well, that alongside the despair there was also a sense of freedom which makes it hard for most homeless people to reintegrate into society.