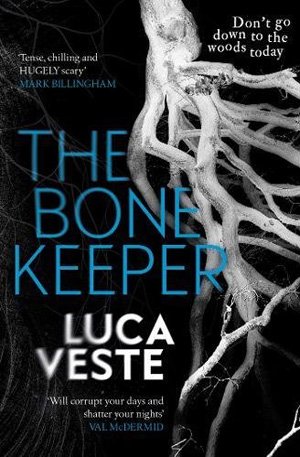 Luca Veste’s latest is a veritable horror crossover as Merseyside police detectives Louise Henderson and Paul Shipley arrive at the scene of a domestic disturbance. But it stirs up old stories of The Bone Keeper for Henderson, a seemingly urban legend that has terrified local kids for many years. The detectives examine some woods where the woman involved supposedly came from. They find a graveyard, with many bodies buried…. The background narrative of is so compelling it feels like the urban myth is based on actual events. Veste plays to his great strengths of characterisation and the Liverpool setting. This is a thriller with a sharp edge, and it’s one to read with the lights on. Read our full review here.

By Paul Burke
CJ Tudor’s debut novel The Chalk Man was a bestseller and, occupying a crime fiction and horror crossover niche, she has been likened to Stephen King. We could all be hearing more about Tudor soon – incredibly, her first four novels are all in development…
News

By DeathBecomesHer
It’s a week full of good news for crime fiction lovers. Here in our news column, we’ve got five new titles for you to try with stories featuring serial killers, missing bodies, kidnappings, old family secrets – all the things that keep you turning the…