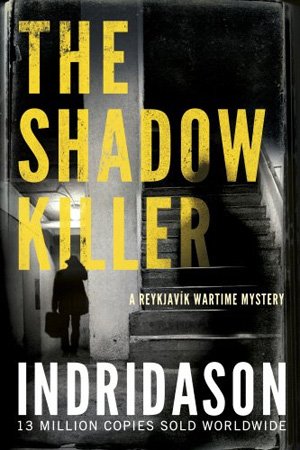 Written by Arnaldur Indridason, translated by Victoria Cribb — Iceland’s leading crime author is best known for his novels featuring the Reykjavik detective, Erlendur. He wrote 10 contemporary novels about the character and his team, and then two that look at the detective’s early cases in the 1970s – a bit like what Endeavour is to Morse. More recently, the author’s fascination with history has led him to look even further back and last year he released his first novel set in Iceland during World War II, The Shadow District. This moving and gripping book was our number one Scandinavian crime novel of 2017.

Its sequel, The Shadow Killer, takes us to 1941, with the United States entering the War and American GIs began replacing British Tommies in occupied Iceland. Against this backdrop, a young man is found in a Reykjavik apartment with half his head blown off. Flovent of the Icelandic CID is paired with Thorson, an Icelandic-Canadian military policeman who is with the British force and who acts as something of a liaison between the army and local law enforcement.

The victim appears be a man called Felix Lunden, a travelling salesman. What remains of his forehead has a swastika on it – dabbed on in blood. The bullet that killed him came from a Colt .45, pointing to an American or possibly British shooter. Chillingly, when they go through the man’s belongings, Flovent and Thorson find a secret compartment containing a cyanide pill in his travel case. Soon, things become even more complicated. It turns out the dead man is not Felix but Eyvindur, another travelling salesman who had problems of his own. Aside from his poor sales record, his girlfriend had just left him.

Two lines of enquiry open up for Flovent and Thorson, both of whom have a gentle manner and seem almost too kind and courteous to be caught up in an espionage-tainted murder case. Firstly, a look into the past of Eyvindur’s girlfriend Vera quickly throws up questions. She’s run off with a British serviceman and has a history of turning men against one another over her affections. Her new man is a possessive drunk and a loose cannon to boot. Suspect two is Felix, the son of a German doctor whose family were staunch supporters of the Nazis prior to the War. Plus, Felix and Eyvindur had a history of their own. Where is Felix, is he a spy, and did he kill Eyvindur?

There are lots of interrogations in this book, and perhaps they go on a little too long, with the detectives hectoring witnesses and suspects. What was interesting about The Shadow District was its dual timelines, with part of the story taking place in the present day. That dimension is missing from The Shadow Killer – which is understandable, and in a way is refreshing with so many books around that jump confusingly back and forth in time. However, it means this book feels a little less poignant than its predecessor.

If you’ve read Arnaldur Indridason’s books in the past, you’ll know that he effortlessly manages to draw in a range of themes and issues, adding some emotional force to them along the way. ‘The Situation’ – young Icelandic women forgetting their morals as thousands of young soldiers appear on the island – was central to The Shadow Killers and is explored further here through Vera, Eyvindur’s girlfriend. The interest of the Nazis in the Vikings as a sort of super race is explored as well, with Felix’s father testing his racial theories on destitute young Icelanders.

Although the Americans are keen to take over the investigation, and boot Flovent off the case, he and Thorson persist. In a neat criss-crossing of interests, the author sends the Icelander Flovent off on the trail of Felix, even though the attached espionage angle would seem to be Thorson’s territory as he is with the forces. Instead, Thorson investigates Vera’s background and the men she has been consorting with, to see if she might have engineered Eyvinder’s murder. The investigation takes in the Icelandic countryside, where people still live an almost Iron Age agrarian life, and the camps, dancehalls, homes and hovels of Reykjavik, a city in flux as it benefits from the military money but strains under the demands of the occupying personnel.

Both lines of enquiry have the potential for tragic outcomes and Thorson and Flovent push hard for the truth, as though they’re squeezing a tube of dried up toothpaste. There’s no saying who the killer is as the book heads to its fraught climax. It’s another captivating read from the master of Icelandic crime fiction.

If you like the sound of this, check out The Shadow District here, and our guide to Arnaldur Indridason’s Erlendur series. For more World War II novels click here.