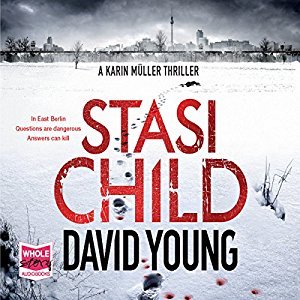 Written by David Young, narrated by Julia Barrie — At the end of David Young’s police procedural and political thriller – the first of his three crime fiction books featuring Oberleutnant Karin Müller – you find out who he was referring to with the book’s title. Yet, listening to the story, you can’t help but think that every character could be a candidate for that title, so pervasive does the influence, the spying, and the danger posed by the Stasi – East Germany’s secret police – come through in Julia Barrie’s narration. You may want to put ear muffs on over your earbuds: this is Cold War fiction at its most chilling.

As an audiobook, Stasi Child works reasonably well, with one caveat. Because the principal protagonist as well as the first-person narrator of some chapters are female, a woman was chosen to narrate. Yet, perhaps because most of the other characters are male and because she undoubtedly wanted to give them distinctive audio personalities in her lower registers, Julia Barrie has pitched the women’s voices rather high.

Even Müller, the book’s protagonist, who is a detective in the murder squad of East Berlin’s Kripo, occupies the higher registers. As opposed to the Stasi, the Kripo is the nickname for the Kriminalpolizei, a unit of the Volkspolizei. She sounds too light, too immature, not forceful enough to be heading a murder squad or to be taken seriously by her Teutonic colleagues, all men.

However, this style does sort of work for Irma, the teenage character who narrates some of the chapters. Barrie nicely captures her alternating petulance and defiance – if you’ve had a teenager, you’ll recognise this affect. A particular benefit of audio is that the reader handles all those multisyllabic German place-names and job titles with admirable ease.

Meanwhile, author David Young’s strong and interesting plotting make this a good listen, providing a trip back in time to a dark era, a forceful reminder of Communism’s menacing rigidities. You can find out more about the story itself and its minefield of political elements in our review of the print edition. It’s the sort of compelling tale that keeps you looking for an excuse to take a walk, or a bike ride, or engage in any task that lets you plug in and listen.