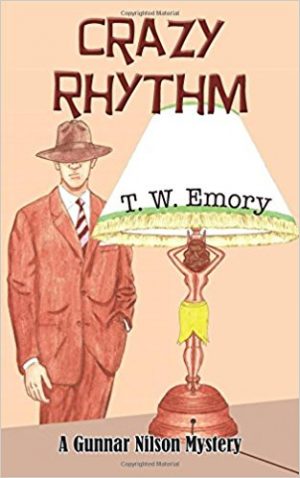 Written by TW Emory — If you need a break from serial killers and world-at-risk mayhem, TW Emory’s Gunnar Nilson mysteries may be a perfect, lighthearted alternative. Crazy Rhythm is entertaining, engaging, and written with tongue in cheek and a big tip of the grey fedora to Raymond Chandler’s wisecracking private eyes.

PI Gunnar Nilson lives in the rain-soaked northwest United States. In the current era, he’s a resident in the Finecare assisted living facility in Everett, Washington, north of Seattle, recuperating from a broken leg. But in his early 1950s heyday, he was a private eye in the city itself. He has stories to tell, and what’s even more gratifying for an old man, attractive Finecare staff member Kirsti Liddell, aged about 20, wants to hear them.

This is the second book having this set-up, and author TW Emory moves you smoothly back to the post World War II era with its ways of talking and living. Nilson, the detective, lives in a heavily Scandinavian boarding house with his landlady, Mrs Berger, a former fan dancer with the photographs to prove it, and two other men, one of whom is a useful sounding-board for Nilson and his theories.

In the story he tells Kirsti, he’s approached by Rune Granholm, the younger ne’er-do-well brother of an old friend, who wants Nilson to attend a meeting with him where a significant amount of cash will be exchanged for an expensive Cartier watch. The whole set-up sounds fishy to Nilson, but he  agrees to go out of loyalty to his dead friend and an understandable dab of curiosity. When he arrives at Granholm’s apartment to meet up prior to the exchange, he finds Granholm shot dead.

He doesn’t tell the police everything he knows about Granholm’s circumstances, intending to do a little sleuthing himself, but is soon distracted by a potentially lucrative case dropped in his lap. A lawyer in town wants him to investigate threatening phone calls his fiancée, a wealthy heiress, has been receiving. Delving into this woman’s complicated past reveals, well, complications.

Suffice it to say, Nilson is soon embroiled in more than one difficult situation, several of which involve beautiful women who seem rather more ardent than informative. At these points, Kirsti breaks in to remind Nilson that her mother, to whom she recounts their conversations, finds his many supposed romantic conquests entirely unbelievable.

Some blood is spilled – Granholm’s certainly – but the whole effect is more charming than nail-biting. Nilson’s evocation of Raymond Chandler is also entertaining, such as, “…it was guys like Rune who eventually got me to believe that the human race was for me to learn from, when I wasn’t bent over laughing at it.” The book is full of such wry comments and while, very occasionally, they get to be a little too much, for the most part they’re handled deftly, leaving you smiling to yourself.

Emory develops a set of colourful characters, male and female, in laying out the key questions: who’s making the threatening calls to the fiancée and why? What is the lawyer who hired him really up to? Oh, and, who killed Rune? Nilson is never wrong-footed as he pursues these investigations, and it’s fun to watch him in action.

I wish he hadn’t named two characters Douglas Eagleson and Dag Erickson, but, whatever, it’s a small quibble. Writing a pastiche of someone as revered as Chandler is brave, and Emory carries it off well, with a style that’s aptly embodied in the novel’s title. A perfect novel for a long airplane flight!