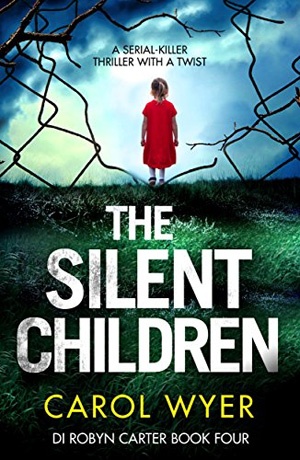 Written by Carol Wyer — Michael Connelly has published two novels this year, a new Bosch and the launch of a completely new series, but his work rate is nothing compared to that of comedy writer turned crime novelist Carol Wyer, who has produced three books in 2017 and has another on the way early next year.

The Silent Children is the fourth in the series featuring DI Robyn Carter, which began with Little Girl Lost, and is set in Staffordshire. It opens with a family day out that goes drastically awry. Little Aiden Moore, his older brother Kyle and their granny are on Cannock Chase, following The Gruffalo trail. When Aiden strays from the beaten path he discovers something much more frightening – a car just like his mummy’s, containing a very still man with a red face.

Aiden’s macabre discovery marks the beginning of a tricky investigation for Carter and her team. It’s Valentine’s Day and Robyn is feeling anything but romantic when the call comes in, even though she has received a glorious arrangement of anemones from a secret admirer. The body is soon identified as Henry Gregson, a well-liked employee of the MiniMarkt convenience store in nearby Lichfield. He’s been shot and when enquiries uncover the fact that Henry was lying to his wife about his whereabouts that day, alarm bells begin to jangle. Gregson was murdered in broad daylight. Who killed him and why?

The narrative ebbs and flows, intermingling with chapters from the past, featuring an abused brother and sister and following their eventful journey to adulthood. They are the silent children of the title and they have something to do with what’s happening in the here and now, but Wyer keeps us on tenterhooks, cleverly hiding the identities of the shadowy pair until a shocking reveal means the pieces finally fit into place in hugely satisfying fashion.

No such luck for Carter and her team, who must deal with mounting pressure as deaths multiply and they are directed down one cul-de-sac after another in search of a serial killer who appears to have no motive at all, until morale is low and there seems to be no end in sight for the investigation. The pace feels a bit sow at times, which might be realistic from a procedural point of view. Soon enough, other things happen to maintain interest levels. Aside from the aforementioned brother and sister, Carter’s personal life is in a right old mess. Followers of the series will be glad to see things moving along here, although newbies are drip-fed enough back story to keep them in the loop too.

The thing I like most about Robyn Carter and her team is that they are allowed to make mistakes as Wyer creates a cast of hugely believable characters in a story that does at times feel a little overpopulated. I wanted to read on and get to the next bit, but there were moments where I had to pause, scan the memory banks and work out who was who!

No such problem with Carter and her fellow DI, Tom Shearer, whose somewhat spiky relationship has developed over the past three books. In addition to an ever-increasing workload, Carter is forced to share space with Shearer and his team and she’s none-too-happy at the prospect. She is still recovering from the sudden death of her partner, Davies, and the spectre of his mysterious demise looms large over much of this novel. There are revelations in store, and Wyer has set us up nicely for book five.

For other interesting police procedurals try A Patient Fury by Sarah Ward, or A Necessary Evil by Abir Mukherjee.