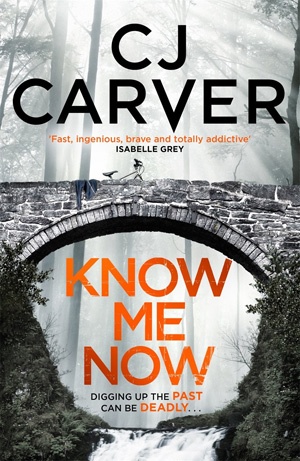 Written by CJ Carver — This is the third crime thriller featuring former MI5 operative Dan Forrester and Yorkshire-area Detective Constable Lucy Davies, who team up with their old friend, general practitioner Grace Reavey. This time out, they are in the Scottish highlands, where Grace and her husband have relocated and where, as a youth, Dan spent several weeks’ vacation every year. His father and three university friends reunited each summer near Duncaid, at the grand old estate of one of their number to hunt and fish and swap stories, and their four children, all approximately the same age, grew up together. The dads trained in medicine and spent their working lives in various research capacities – except for Dan’s father, who joined the Royal Marines.

The children now have well-established careers of their own. Gustav created a clinic in Isterberg, Germany; Christopher took up genetic engineering of superstrains of rice and has a lab near Duncaid; audacious former-tomboy Sophie does something for the government in London; and Dan joined MI5. At present, though, he’s out of government service, working as a political risk analyst. Although this rundown suggests a large number of core characters, Carver does a good job of giving them personalities and personas unique enough that you’re not liable to become confused.

Though Christopher and his wife are having a rough patch, their situation grows tragically worse when their 13-year-old son Connor dies, in what the police seem too hasty in labeling a suicide. Christopher doubts their conclusion and calls on Dan for help finding out what really happened. Dan, in turn, persuades Lucy to take a few days off and join him in Duncaid to look into the case. Carver does such a good job describing the damp, oppressive, grey highland atmosphere, you may feel compelled to put on a jumper. Or two.

When news arrives that Dan’s father has been murdered in Germany, he leaves Lucy in charge in Scotland and focuses on investigating who killed his father and why. The unlikely coincidence that two family members of this tight-knit group died within days of each other strikes them all. What is the connection? Someone is determined that Dan not discover it, and his probing soon puts himself, his wife, and his newborn son at risk. In light of the very tangible threats, his motivation for continuing to investigate – and some of the other characters’ motivations as well – aren’t as believable as they might be.

Dan’s father left a letter ‘in case something should happen’, requesting that he arrange a clandestine meeting. When he does, the only information he can get is a title: Project Snowbank. As the story picks up steam, it has aspects of a medical thriller involving ethically shaky research from long ago. Lucy, meanwhile, has to overcome repeated stonewalling in her investigation of Connor’s suicide, in part because, operating outside her jurisdiction as a friend of the family, she’s trying to keep her police identity quiet.

Lucy has a form of synesthesia, and in situations of high emotion sees certain colours. She’s a bit of an oddball, trying to hide what she views as dysfunctions in her personality from her boss, whom, inconveniently, she has fallen in love with. Dan also has a quirk, in that his memory has gaping holes from his past work with MI5. Carver tends to provide more backstory than needed about characters when they are introduced (much of this may relate to events in the books prior to Know Me Now), which becomes a drag on the narrative. I wish these two interesting mental conditions, which could bear strongly on Lucy and Dan’s ability to do their work (for good or ill), were more fully exploited.

The plot is engaging and clicks right along – perhaps a few too many coincidences – and raises questions about biomedical technology, and its possibilities, that are well worth thoughtful consideration.

If you like medical thrillers you may also enjoy books in the Rizzoli and Isles series by Tess Gerritsen, a physician and crime author, or JA Schneider’s Embryo, from 2012.