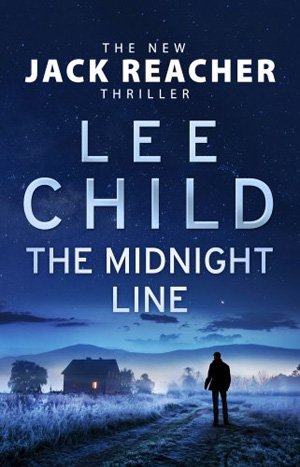 Written by Lee Child — With millions of fans around the world, Lee Child returns with the 22nd novel in his Jack Reacher series. After all he’s been through over the years, what more can the author do with his tall and powerful lone wolf crime buster? Well, how about put him on the first bus out of Milwaukee? Reacher is heading north to the shores of Lake Superior. He’d prefer the south, where it’s warmer, but rules are rules and he jumps on.

Hours later the bus pulls into a small town somewhere en route for a comfort stop. While stretching his legs Reacher passes a pawn shop, where he notices a ring. But this is no ordinary piece of jewellery. It’s a graduation ring from West Point, the military academy Reacher himself attended, but it is for the class of 2005 and so a little after his time. By the size it was more than likely owned by a woman. Reacher is surprised somebody who went through everything West Point had to throw at them wouldn’t give up such a symbol lightly. He senses trouble.

Inside the shop he inspects the ring, which is engraved with the initials SR. The owner knows nothing about the ring and its heritage, telling Reacher he obtained it in a job lot from a man called Jimmy Rat. Jimmy can be found any bar where there’s a minimum of six Harley Davidsons outside. Reacher buys the ring, lets the bus leave without him, and goes looking for Jimmy Rat instead.

As expected Jimmy Rat is in a run-down bar, surrounded by friends. His appearance is much like his name. Reacher asks where Jimmy got the ring, but he isn’t the type to give up information easily so Reacher takes his usual approach. If subtly doesn’t work, his fists will get results. Outside, just before they’re about to get down to business, a cop car rolls past, temporarily interrupting proceedings. When the officer has left, Reacher puts down six of Jimmy’s friends in a fist fight before the Rat spits out a name – Arthur Scorpio who operates out of a laundromat in Rapid City. He sends through low grade items to be fenced.

Reacher catches the first bus heading for Rapid City and tracks down Scorpio in a beat up part of the city. Scorpio is expecting Reacher because the Rat has called ahead. But Reacher isn’t the only person who’s after Scorpio. City detective Gloria Nakamura is monitoring him and there’s Terry Bramall, a retired Chicago cop who’s now a private detective specialising in missing persons.

After dealing with Scorpio’s bodyguards and threatening to put him in a tumble dryer, Reacher gets another name and destination – Mule Crossing in middle of nowhere, Wyoming and Sy Porterfield. On his arrival he steps into a community blighted by prescription drug dependency. And Porterfield is dead, apparently killed by a bear. But where is Serena, the ring’s original owner? And how did she end up out here?

For much of the book, Lee Child does what he does best. He has Reacher stubbornly working at a problem of someone else’s making that most people wouldn’t even notice much less bother with, taking out a string of bad guys along the way through a combination of brute force and willpower. Threatening Scorpio with one of his own tumble dryers is a great touch. It’s thoroughly enjoyable and entertaining as Reacher takes baby steps towards his destination with the author dropping breadcrumbs of information for us along the way, pulling us along with him.

Once Reacher gets to his Mule Crossing, The Midnight Line becomes a more pedestrian affair. It feels as if Reacher gets steadily more lost in the events taking place, particularly once he achieves the original objective. Plenty more happens towards the end, but the narrative just isn’t quite as compelling.

The previous two novels, Night School and Make Me, were relatively disappointing, and The Midnight Line is significantly more interesting. However, it isn’t as gripping and driven as novels from earlier in the series. You’ll enjoy Lee Child’s trademark stripped down descriptions and short, punchy sentences. Reacher takes no nonsense, goes in, does what he has to do and leaves. The underlying story is a very current one for the US. The opioid dependency crisis is one of the topics the book focuses on.

For diehard fans it’s likely The Midnight Line will prove a big hit. Reacher novels are sure fire bestsellers, every time. For those of us who were hoping for a return to past form, we’ll have to keep waiting. It’s good, but no cigar…

We’ve reviews of a number of Lee Child’s novels including No Middle Name, Night School and Make Me, among others. Try original lone wolf crime novel The Thirty-Nine Steps, or see Rogue Male for another classic in the subgenre.