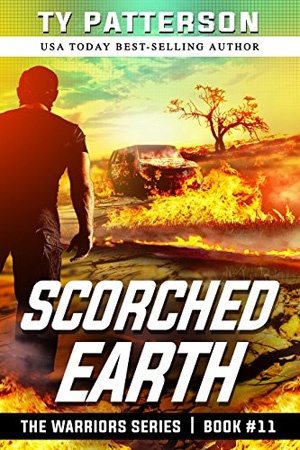 Written by Ty Patterson — Zeb Carter and his team, the Agency, return in a fast-paced chase thriller. Based in the US, the Agency is a specialist unit on the fringes of law enforcement and the war on terror. To their horror two of the team, the twins, are snatched from the street and a desperate chase to get them home safe is sparked off. The hunt pulls them across the country and as far afield as Syria as the machinations behind the kidnap are revealed.

This is a fantastical world. Carter has everything and more. The Agency has deep pockets and the best kit money can buy. All the members of the team are ultra-talented. They are smarter, faster, and more dangerous than anyone else. They are loved and feared in equal measure. Author Ty Patterson does explain some of the Agency’s background but it is somewhat hand wavy in its vagueness. It is possible earlier books in the series, which started with The Warrior, have set out more backstory but for now it doesn’t matter. We don’t need to let the details get in the way of the story.

Patterson writes in short sentences that will leave you slightly breathless. The pages spin past but even so he is able to up the pace in the action scenes. It is quite a feat and as a result the action has a surreal, stylised quality. I honestly couldn’t decide if I liked it or not but, more than anything, it is simply different to most mainstream crime novels.

There is lots of violence, but it is sanitised. People die but there is little gore, and the shoot-them-in-the-shoulder trope is well in evidence here. Men are knocked out with single blows and it reads like the literary version of a hyper-violent gaming experience rated safe for kids. But, again, that’s more of an observation than a criticism. There are some sections that are described in more graphic detail but it is minimal.

Despite the widespread technological devices available this is no techno-thriller either. Initially this feels a little underdone but it soon becomes apparent that this is simply the style of this novel. Paterson is not aiming at realism. It’s more akin to an urban fantasy cross crime thriller mash up.

Describing this book as pacy feels a little, well, pedestrian but Patterson does make an effort to break the action up. The Agency team eat, snatch sleep, and go to the bathroom. They also cry and emote but these are brief interludes from the action. There isn’t any character development but in a long-running series that’s a familiar problem. The scope of this book is global and the geo-politics are handled with a light touch and with just enough information to get us orientated.

Ty Patterson has done a remarkable job in writing a long series that has clearly captured the imagination of many readers. If you like a strong literary element to your novels then you will be disappointed. There is little literary her; these books are pure, distilled escapism and that does limit the readership to a particular sub-set. It won’t be for everyone.

Patterson delivers an absolute pure shot of adrenaline-fuelled storytelling. It is stripped and raw and pushes through at an unrelenting, breathless pace. If this is your kind of read then you are going to love it. You will scream, you will shout, you will feel the rage. And, you will blast through the pages. Suspend disbelief all ye who enter here. Hang up your scepticism, put your cynicism aside, and just enjoy the ride.