Mushrooms can be deadly

On the Radar — The latest novel from Finnish author Antti Tuomainen is arriving soon and this time the victim of the piece appears to be a man who has made millions growing mushrooms. An interesting conceit gets even more intriguing when you find out he’s being poisoned… or maybe he’s just been eating the wrong kind of mushrooms? This week’s new books also feature more than your fair share of troubled coppers, a crime debut from English writer Lloyd Otis and a detective agency run by four women – one from each of the home nations making up the UK… Ten books in total. Enjoy!

Want crime fiction news weekly to your inbox? Sign up for our newsletter, The Rap Sheet. 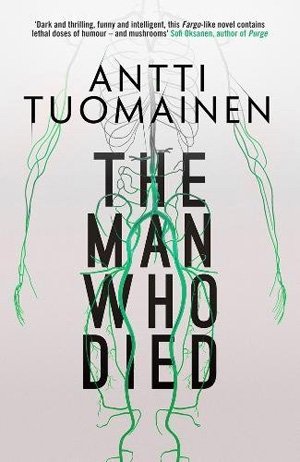 The Man Who Died by Antti Tuomainen
The Mine. Dark As My Heart. The Healer. Finnish author Antti Tuomainen’s dark, dramatic and poetic standalone novels have made him one of the country’s leading crime exports. The Man Who Died is a brand new tale of shadowy dealings, as mushroom magnate Jaakko Kaunismaa discovers that he is slowly being poisoned. He makes it his mission to find out who wants him dead, embarking on a surprising and sometimes comedic journey that, according to the blurb, might remind you of Fargo. Watch for our review soon. The book is out 10 October.
Pre-order now on Amazon 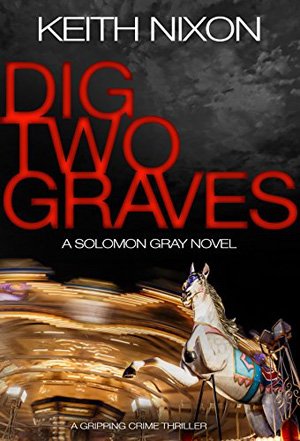 Dig Two Graves by Keith Nixon
He’s best known for his Konstantin Boryavok series, featuring a Margate tramp with hidden talents, but now Brit Noir author Nixon has turned his attention to a new central character, DI Solomon Gray, a multi-layered protagonist with a dramatic back story. Ten years ago, he lost his son at a fairground, and that disappearance still reverberates through Gray’s every waking moment. He’s a man on the edge – can he hold it together long enough to find out what really happened to a teenager who has fallen from a five-storey block of flats? Out 10 October.
Pre-order now on Amazon 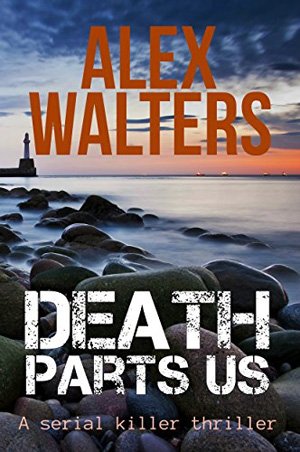 Death Parts Us by Alex Walters
Jackie Galloway was a copper, sacked without pension, now addled with dementia and living on the Black Isle in the Scottish Highlands. Galloway was DI Alec McKay’s senior and is not remembered fondly. He is found dead but when Galloway’s wife, Bridie, reveals he had been getting threatening notes McKay finds himself investigating the death of his old boss. We reviewed the first in the series Candles and Roses last year and McKay remains estranged from his wife after the death of his daughter. The murders of more policemen crank up the pressure on McKay as he scrambles to solve the case. Out now.
Buy now on Amazon 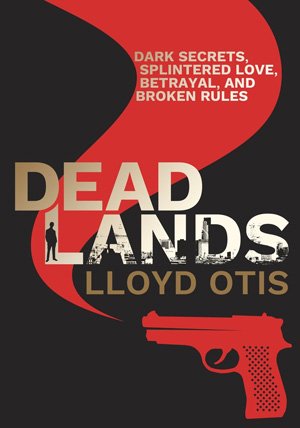 Dead Lands by Lloyd Otis
Young British author Lloyd Otis’ debut lands on 12 October but immediately sweeps us back to the 1970s for a police procedural focusing on the murder of a woman. Alexander Troy has been arrested but first of all refuses to use his alibi and then bolts from police custody. DI Breck and DS Kearns, each with their own motivations, must hunt him down in a city where there is a rising tide of racial discrimination and violence.
Pre-order now on Amazon 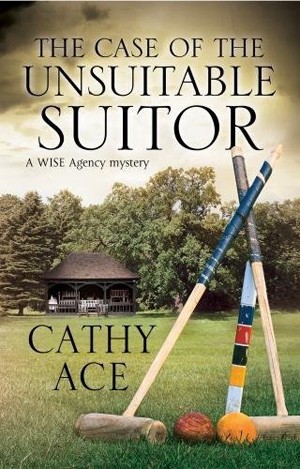 The Case of the Unsuitable Suitor by Cathy Ace
Standing for Wales, Ireland, Scotland and England, the WISE agency has some of that unity the UK longs for at the moment. It comprises an investigator from each of the home nations and here Carol, Christine, Mavis and Annie are trying to find out why the man who wants Annie’s hand in marriage has been widowed three times before. Is her safety at risk with Huw Hughes? What about the rest of the village? Cosy, with an old fashioned feel to it, and out this week. We’ve previously reviewed The Case of the Dotty Dowager.
Buy now on Amazon 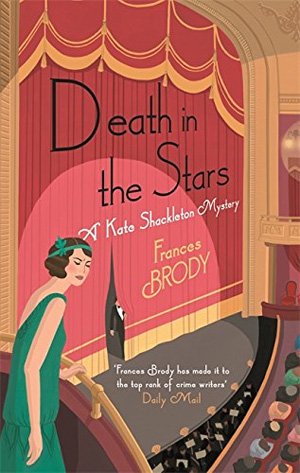 Death in the Stars by Frances Brody
Out 5 October, this is the ninth in the series featuring sleuth extraordinaire Kate Shackleton. It’s set in the wilds of North Yorkshire, where everyone is excited about an impending eclipse. Kate has joined theatre star Seline Fellini on a viewing trip to Giggleswick School, but there are nefarious deeds afoot as darkness falls, resulting in the death of Selina’s friend and co-star. It’s a mystery too tempting for our heroine, who sets about unearthing the killer in her own inimitable fashion…
Pre-order now on Amazon 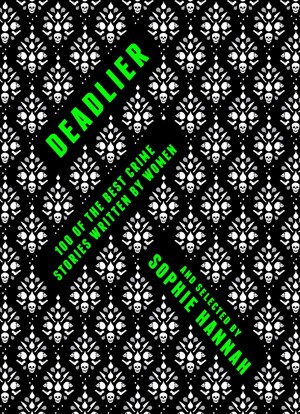 Deadlier edited by Sophie Hannah
This enormous compendium of short crime stories, all written by women, is deadlier indeed. At over 1000 pages, we have a health and safety notice attached to it as it is a bend-at-the-knees-to-lift job. Inside you’ll find work by heavyweight authors including Margery Allingham, Belinda Bauer, Daphne du Maurier, Patricia Highsmith, Laura Lippman, Val McDermid, Denise Mina, Ruth Renell, Dorothy L Sayers, Karin Slaughter, Donna Tartt and 89 others for 100 in total. The selection was made by Sophie Hannah and this impressive hardback has a rather fine jacket and endpapers featuring a skulls, knives, pistols and blood drops motif. An ideal gift at Christmas, it’ll be out 5 October.
Pre-order now on Amazon 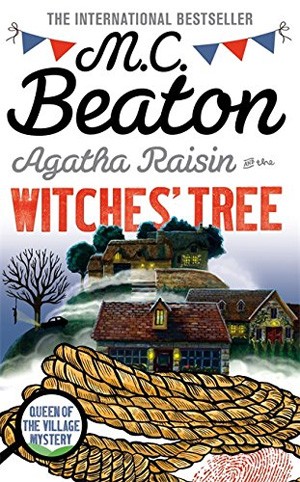 Agatha Raisin and the Witches’ Tree by MC Beaton
Queen of the village mystery MC Beaton is back with another cosy tale featuring quirky private eye Agatha Raisin. There’s been a murder in the sleepy Cotswolds hamlet of Sumpton Harcourt, with the elderly victim left hanging from a tree. Enter Agatha, thrilled to get away from the daily drudge of lost cats and divorces. But when more deaths occur and she uncovers an unsavoury secret about the village’s inhabitants, Agatha begins to fear for her reputation… and her life. Out 3 October.
Pre-order now on Amazon 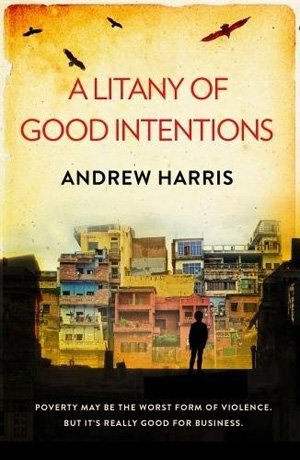 A Litany of Good Intentions by Andrew Harris
Chinese philanthropist Jock Lim has managed to find a new way to raise 2 billion people out of poverty and ill health. Based on unpublished work by Einstein it could usher in an age of global prosperity. But not everyone wants a new world order and they are prepared to kill to stop it. Dr Hannah Siekierkowski, an oncologist, finds herself embroiled in the fight against corporate greed and racism. This is the second book in the Human Spirit Trilogy thrillers that use the backdrop of science to tackle some of the biggest issues on the planet. Released 12 October.
Pre-order now on Amazon 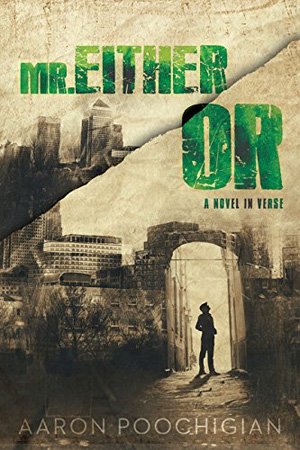 Mr Either/Or by Aaron Poochigian
And now for something a little different. This is a crime novel laid out entirely in verse from poet Poochigian. Zach Berzinski lives undercover as a student at NYU and Li-ling Levine is a curator at the New York Met. Ancient legends and warring gangs collide in a lyrical romp over Manhattan. Delving into mythology and classical epics but with a noir pedigree this is a genre-bending deep dive into crime fiction. There’s even some sci-fi elements mixed in. It promises a surreal experience heavy on the imagery. Out 10 October and our review is coming soon.
Pre-order now on Amazon

By Erin Britton
In The Corpse with the Turquoise Toes, the 12th cosy mystery featuring Cait Morgan and Bud Anderson, Cathy Ace delights in derailing yet another holiday for her devoted detective duo. An internationally renowned criminal psychologist and a retired homicide detective, respectively, Cait and Bud are…
Book Club