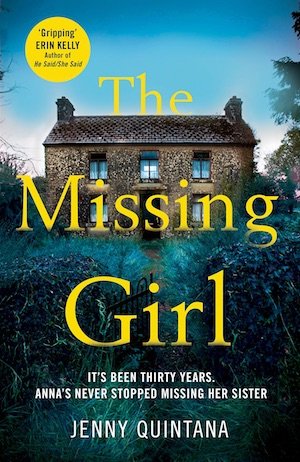 Written by Jenny Quintana — Anna Flores’s beloved older sister Gabriella went missing as a teenager and Anna never quite recovered from the loss. She thought she had left all that grief behind her when she fled England and went to live abroad. But now, 30 years later, she has finally come back to her home village after her mother’s death to clear out the family home and the secondhand shop. She doesn’t intend to stay long in this place which holds such painful memories for her, but she gets caught up in the house clearance of a former neighbour of theirs. This leads to a half-hearted attempt to investigate Gabriella’s disappearance once more, mostly through reminiscing, and every second chapter in The Missing Girl is a flashback to those few weeks in 1982 leading up to the moment when she vanished.

The technique used in this debut novel can add tension if done well, but in this case longer and more coherent chunks of back story might have worked better than receiving it piecemeal. From the flashbacks we begin to understand that Anna felt her parents were favouring Gabriella and keeping something from her at the time. Could the girl’s disappearance have had to do with the series of disappearances of young blonde girls in the region? Or were there family secrets as well?

There are many details here which lovingly recreate small village life in the 1980s. Above all, it is the story of two sisters growing up in a rather small community, where it is difficult to remain anonymous. They attempt to cut free from their mother’s apron strings and become more independent, but this comes at a time when their parents are frightened and caution is required. Although their social circle is limited, that summer all sorts of strange coincidences seem to arise. A mysterious neighbour called Edward Lily moves into a cottage next door and rumours abound about his mad Spanish wife and ill daughter. There is the dreadful Mrs Ellis with her creepy daughter Martha who their mother persists in visiting, although Anna does not like them at all. Finally, there is poor, simple-minded Tom the street sweeper, who is the last person to be seen with Gabriella and is therefore taken in for questioning by the police.

Anna now has the time to investigate things more thoroughly and the maturity to not jump to conclusions like she did when she was 12. She also begins to understand how her own jealousies and morose behaviour at the time might have influenced events.

It’s difficult to know how to categorise this novel, other than by what it is not. It is not a psychological or domestic thriller, although family secrets are omnipresent. It is definitely not a police procedural, since the police failed to find out the truth about Gabriella, so now it’s up to Anna to become an amateur detective. It is not full of twists and unexpected reveals. I guessed the family secret pretty early on, and some of the secondary characters felt a bit schematic. What is enjoyable about the book, however, is the prickly and believable main protagonist, who is forced to reassess her entire childhood and relationship with her family and friends, as well as the poignant story of thwarted sisterhood and growing up with guilt and loss. I do like Jenny Quintana’s writing and excellent recreation of the 1980s, so I look forward to seeing what she comes up with next.