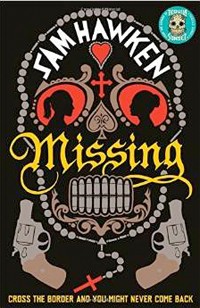 Written by Sam Hawken — Jack Searle lives a quiet life in Texas, near the Mexican border. He earns enough to get by as a builder, looking after his stepdaughters Lidia and Marina. Jack’s wife died of cancer several years ago. Jack and the girls have family over the border in Nuevo Laredo and regularly visit. When Marina wants to go to a concert with her cousin Patricia over in Nuevo Laredo, Jack isn’t happy. It’s a dangerous place, rife with corruption, drug cartels and the violence that surrounds them. But Marina eventually persuades him, and she and Patricia head off for a night of fun. One from which they don’t return.

The family are frantic. It seems no-one has seen or heard of the girls. But Jack and Patricia’s father have one piece of luck. Gonzalo Soler, the detective investigating their disappearance, is the one clean cop on the Nuevo Laredo force. He’s keen to help, but achieving anything good in this Mexican city is difficult. Just as Gonzalo is making progress the entire police force is suspended due to its crippling corruption, with law enforcement handed to the army. Gonzalo is off the case, replaced by an inexperienced soldier.

Neither Jack or Gonzalo is willing to give up and they carry on the investigation on their own facing the drug cartels, corrupt colleagues, and a wall of fear and silence. Meanwhile, time is running out for the girls…

The Dead Women of Juarez and Tequila Sunset by Sam Hawken were nominated for CWA Dagger Awards. Based on the strength of Missing it’s easy to see why. The story starts gently enough, with Jack going about his daily business and visiting his family. But as soon as Marina steps across the border all hell breaks loose. It’s tense and downright scary. Hawken creates a fantastic sense of place in his narrative. The brutality of Nuevo Laredo, where a life is cheap, jumps off the page. The tension is so palpable it’ll make you yourself feel at risk of something bad happening. And a little grubby, too.

The characters carry the investigative process along, as Jack takes increasingly risky and desperate actions to find his missing stepdaughter. If you’re a parent you’ll know just how much Jack is willing to give up – even his own life – to make sure the girls are safe. The bad guys – police, narcos, prostitutes – are purely out for themselves. Then there are the innocents who just have to survive, keeping their heads down and their eyes averted. There’s a very real chance that being in the wrong place at the wrong time can get you killed.

This is not a happy story. Missing is rather blunt in its depiction, because that’s how it is in Nuevo Laredo. And unfortunately there’s a chilling certainty to how the story unfolds. An author’s note at the end outlines that the basic way of life in Nuevo Laredo that forms the backdrop for the story is true, and the suspension of the police force actually happened.

Excellent, powerful writing that will leave you with an image seared into your mind of the grimmer side of life for days to come, guaranteed.

Missing is released on 4 September. You can read an interview with the author here.