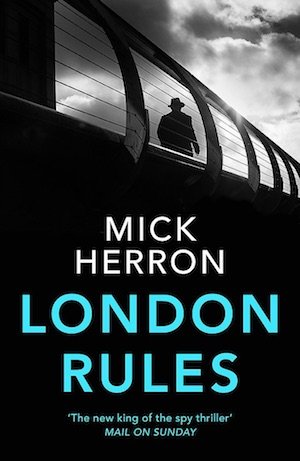 Written by Mick Herron — In John LeCarre’s classic Smiley’s People, Moscow Rules are a form of ultra-cautious tactics for operating in the most dangerous circumstances. They include such measures as dead drops, chalk marks as signal markers, and careful face-to-face meetings. In the end, they were not enough to protect Smiley’s agent from KGB assassins. In Mick Herron’s satirical Slough House series, London Rules are perhaps more straightforward, but none the less just as inviolate for its spooks. In short: cover your arse.

This espionage novel begins with a scene of carnage. Uniformed soldiers arrive at a remote village and casually massacre its inhabitants. Children, old men, even the chickens, are slaughtered under a hail of automatic gunfire. It had me wondering how an atrocity in Africa could come to involve Herron’s slow horses. It is only with the last sentence in the sequence that the other shoe drops. This isn’t Africa. It happens in the Derbyshire village of Abbotsfield. This is a bravura piece of writing, and a standard that Herron keeps up throughout.

Back in London the slow horses continue with their pointless work. Each has been blackballed from Regent’s Park, the centre of MI5, for some serious misdemeanour in their past. Their punishment is to be sent to Slough House, and tasked with soul destroying work until they can take no more and resign. The fearsome Jackson Lamb heads the team. Recovering alcoholic Catherine Standish is number two, and below her are the rest. JK Coe is from Psych-Eval and has a bad case of PTSD; Shirley Dander is a recovering cocaine addict with anger management problems; Louisa Guy and River Cartwright still dream of redemption and a return to the Park. At the very bottom of the pecking order and the butt of everyone’s jokes is computer geek Roddy Ho, a man so bad that the service didn’t even wait for him to screw up but sent him to Slough House right from the start.

Standish saves Ho from being run over in an amateurish hit attempt in the streets around Slough House. The slow-witted Ho doesn’t even realise what happened, and it is left to the team to investigate. Suspicion naturally falls on Ho’s girlfriend Kim, for no woman would go near him without an ulterior motive. As this is happening, first desk at MI5 Charlie Whelan is being pressured by the prime minister. Post Brexit, the PM is fighting for survival, and word has reached Number 10 that enthusiastic leaver Dennis Gimball and his columnist wife Dodi will be making a power play to unseat him. I’m sure than any similarity to Michael Gove is purely intentional. The PM wants the dirt on Gimball and expects Whelan to deliver it.

From these threads, Herron weaves another hilarious satire. The plot is complicated, the plotting of the various factions involved even more so, and it’s testament to Herron’s skills that you will never get lost. There is some fantastic verbal sparring, though Lamb always gets the best lines. No cow is too sacred for Lamb to slaughter, no insult too personal to hold back. A new character is introduced, Molly Doran from records, in a nod to Connie from the Smiley books. She is in a wheelchair and her disability is even mocked by her friends on the team, going well beyond good taste. From the pen of a lesser writer I’d be throwing the book down but it is so intelligently done – a bit like Bill Hicks – that I was nearly in tears with laughter.

Ultimately, what saves Lamb (and Herron) is that Lamb really cares. Beneath the crude behaviour, the insults and farting, the constant attempts to get Standish drinking again, if Lamb thinks you deserve it, then he is loyal and protective to the very end. Herron makes us care about all of his screw ups (okay, maybe not Ho), because he knows if we don’t, then the humour and satire will fall flat.

London Rules – or The Jackson 5 as I like to think of it – is the second great novel this year Herron has had published; very different from This is What Happened, but just as good. What connects them both, in fact what connects the whole series, is their optimism for the human spirit. Dig in.

LeCarre’s George Smiley features in Swedish author Arne Dahl’s classic crime favourites. You can also take a look at what we thought of Mick Herron’s Slow Horses, and Dead Lions from the Jackson Lamb series.

By RoughJustice
The second novel in English author James Wolfe’s Traitor trilogy examines a man’s mid-life crisis. August Drummond lost his mind somewhat after the death of his wife, and his career in the British secret service went up in smoke shortly afterwards. Adrift in the Middle…
Recommended

I Know What I Saw

By Catherine Turnbull
Once wealthy banker Xander Shute is living rough on the streets in I Know What I Saw by Imran Mahmood. He takes refuge in a flat, where he witnesses the murder of a woman at the hands of her lover. When he reports the vicious…